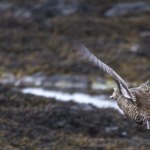 Global production/harvest of cleaned eiderdown can fit on one small truck (yearly ca 4t). Yearly goose down harvest is counted in the tens of thousands of tons. Japan alone imported 6.000t of goose down in 2010 and the main areas for handpicking eiderdown is Canada (10-15%) and Iceland (85-90%), annually Icelandic eiderdown accounts for ca 85% of global supply and what is important to have in mind is that the eiderdown supply is naturally limited forever, and if anything dwindling .

It looks like many eiderdown producers, particularly in Japan, are selling “eiderdown” duvets filled with regular goose or other type of down, This is hurting the eiderdown market as these producers are pushing the price down for this incredibly rare product Also, the performance of these “fake eiderdown duvets” is dramatically worse.

The insulation properties of the real eiderdown is unsurpassed

The eiderdown market is environmentally friendly and self-sustainable, unlike all other filling materials used in duvets (for example goose down which is picked off the goose while still alive). The eiderdown market is the only market stemming from a wild bird, in a completely eco-sustainable environment. In 2009 official records in Japan showed sales of eiderdown duvets over 20t and it is estimated that Icelandic eiderdown is at least 70% of Japanese market, or ca 14t sold in Japan.

Official records in Iceland showed, however, only around 2-4t annual export to Japan (2000-2009) so we can draw the conclusion that many producers of eiderdown duvets, in Japan, are either mixing the eiderdown with regular goose down and/or putting a different insulator in the duvets and calling it eiderdown to sell at a higher price and/or greater profit.

Be aware of eiderdown duvet producers as they might be mixing the eiderdown with a different down, for example using 10% eiderdown and 90% of regular down. The price of eiderdown is very expensive, much more than regular goose down for example, this is due to two main reasons: Limited supply (main reason) and Superior performance (greater insulation properties).

It is also a funfact that a duvet filled only with eiderdown from Iceland is rarer than a Rolls Royce as the RR sells in higher quantity The limited natural supply of this eco-sustainable commodity is truly fit for a king due to its performance and rarity.

Look for origin verification and/or proof that there is only eiderdown in the filling material Finally, you are supporting a completely eco-sustainable and eco-friendly production process

1kg of cleaned Icelandic eiderdown sells for over 1,400EUR and a producers need a minimum of 1kg of cleaned eiderdown to fill a regular one person duvet. Other cost factors to include; cotton – covering the eiderdown, labor, marketing and other.
Contact details:
http://www.royaleiderdown.com/contact-us/
Hreggviður St. Magnússon, Founder @ Royal Eiderdown
www.royaleiderdown.com