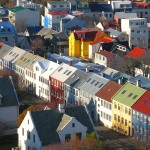 According to various studies, including PEDIATRICS, Iceland has been ranked amongst the lowest adolescent drinkers of alcohol in Europe.

PEDIATRICS asked Icelandic students whether they had ever been binge drinking, with only 6 percent claiming yes, compared to 38 percent in Holland, as an example.

The journal explained that the youth of Iceland had the lowest binge drinking rate, as opposed to The Netherlands, Scotland and Germany, which had the highest.

Furthermore, Lead author of the Institute for Therapy and Health Research in Keil, Germany, Dr Reiner Hanewinkel, stated that, “The drinking cultures in countries like Scotland, Germany and Holland are the same but in Iceland they are different because people have maybe one or two drinks with a meal. They don’t drink in binges.”

Facts from Iceland state the fact that 42% of 15-year-old adolescents did drink alcohol 15 years ago but today, with strategic intervention, the number is down to 5%. Binge drinking is and has been a problem in Iceland but intervention has proven its value. Below shows the decrease in substance abuse amongst 15-16 year olds from 1998 to 2013: 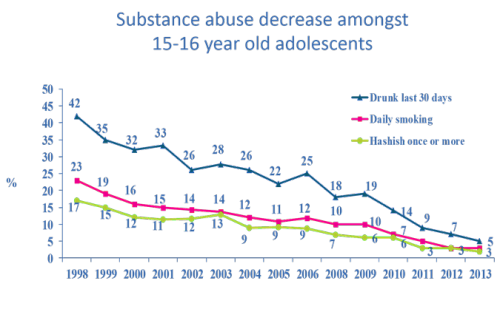 Reykjavik, Iceland’s capital city, has used a method of substance prevention over the past 15 years, called the ‘Icelandic Model’. A conference regarding these methods will be taking place on 19th – 20th March 2014, at the Hilton Reykjavik Nordica in Reykjavik, Iceland.

The conference, titled Cities for Youth, is set to hold practical “hands on” information directly from those who have contributed to and lead the prevention work in Reykjavik, as well as other various keynote lectures from health experts.

The ‘Icelandic Model’ is a theoretically-grounded, evidence-based approach to community adolescent substance use prevention that has grown out of a collaboration between policy makers, behavioural scientists, field-based practitioners, and community residents in Iceland. The intervention focuses on reducing known risk factors for substance use, while strengthening a broad range of parental, school, and community protective factors.

To find out more regarding Cities for Youth, visit http://www.citiesforyouth.is