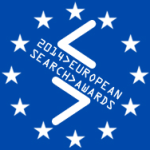 It is the last chance for Europe’s top search and digital talent to enter the 2014 European Search Awards, with the deadline for submissions extended to 24th January 2014.

Now in its third year, the European Search Awards has already attracted hundreds of entries from the leading search and digital agencies and professionals throughout Europe.

Categories include Best Use of Search, Best Pan-European Campaign, Best Mobile Campaign and Best Agency. The awards, which are organised by Greater Manchester based events agency Don’t Panic, are open to companies based worldwide who are delivering work in Europe.

The deadline was 17th January 2014 but has now been extended until 24th January 2014, and the shortlists will be published on 14th February. The judging panel includes:

The winners will be announced at an awards ceremony in Reykjavik, Iceland, on Friday 28th March 2014.

The European Search Awards are delivered in partnership with headline sponsor Manual Link Building and in association with Reykjavik Internet Marketing Conference (RIMC) and SEMPO.