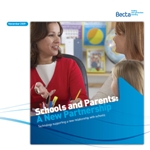 Fifty-four percent of teaching staff claim that the relationship with their pupils’ parents varies greatly from parent to parent. However, school staff are keen for schools to introduce tools to help them have more informed and effective discussions with parents. According to a report, commissioned by Becta into parent teacher relationships, there is a need for better communication channels between parents and schools that will help child progression, whilst also managing the impact on the teacher’s workload to ensure the most efficient use of time.

Becta is the government agency aiming to promote and achieve the productive and innovative use of technology throughout the teaching and learning process. The Schools & Parents: A New Partnership report is part of the ‘Next Generation Learning’ campaign, which encourages parents to contact their child’s school in order to establish how and if technology is already being used, and how it can improve communications between them and their child’s school in future.

The comprehensive report also reveals that thirty-six percent of teachers say they often come across ‘pushy’ parents who need ‘constant reassurance’ and others (19 percent) who try to ‘influence everything that goes on in the classroom.’ More than eleven percent said they feel dismissed as an ‘overly demanding’ parent and another eleven percent say they are made to feel that they are imposing on the teacher’s time when they try to make contact.

Thirty-four percent of teachers admit they often come across parents who ‘try and influence decisions’ about their child, such as which class they go into or where they sit in a classroom. They also admit that half (50 percent) of the parents that they have the most contact with are those who make themselves available to speak to the teacher at the end of the school day.

Nearly half (48 percent) of teachers believe that whilst parents are a great source of support, they don’t always know the best ways to help. Eighty-nine percent of parents say technology helps them get involved in their child’s education, or it could play a more powerful role if they better understood how to use it. Thirty-seven percent of teachers would welcome practical advice given to parents on how they can communicate more effectively and over a third (39 percent) said it would be helpful to show parents who are already contacting them how they might achieve this in a more beneficial way to both schools and parents.

The Schools & Parents: A New Partnership report and more information about Becta’s ‘Next Generation Learning’ campaign can be found at www.nextgenerationlearning.org.uk