SagaPro is a herbal remedy produced from leaves of the Icelandic medicinal herb Angelica archangelica. It has been sold on the Icelandic market since 2005 and research has shown it to be beneficial for men and women in cases of nocturia and frequent urination.

Ingvi Hrafn Jonsson, an Icelandic television personality, claims he has to use the bathroom about once every night. This might be somewhat annoying for most people, but Mr. Jonsson is actually very satisfied. So would most people be if they formerly had to relieve themselves 4 or 5 times per night.

Mr. Jonsson is one of many older men who know the effects of SagaPro firsthand. “I would never have believed that one little tablet before bed would change my life so drastically—from 4 to 5 trips to the toilet every night to one or none at all. I must say SagaPro is a lifesaver for older men. It also helped my wife sleep. She said that sleeping in the same room with me was something akin to sleeping in a train station!” says Mr. Jonsson.

SagaPro is produced by SagaMedica, an Icelandic biotechnology firm which specialises in research on Icelandic medicinal herbs. Bioactive compounds in SagaPro are believed to have a relaxing effect on smooth muscle cells, and this is thought to be one of the reasons for its efficacy.

SagaPro has been shown to reduce nocturia in men with a benign enlargement of the prostate gland, thus reducing the number of nightly visits to the bathroom. Experiential use has also shown an indication of the same effect on people of both sexes who suffer from an overactive bladder.

The product is made from Angelica archangelica; a herb used in Iceland for more than 1100 years and claimed to have positive effects on people suffering from a variety of ailments. These beneficial effects have now been explained through research by Dr. Sigmundur Gudbjarnason and associates since 1992. 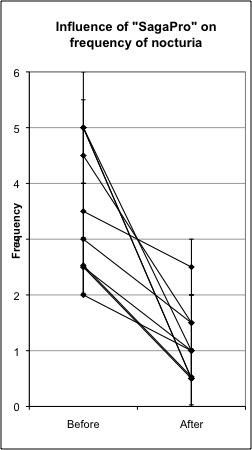