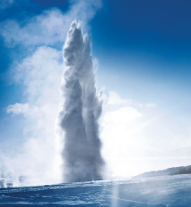 It is our pleasure to present our second annual U.S. Geothermal Energy Market Report. The overall development of geothermal energy is very positive in the US. The installed geothermal power generation capacity has increased by 4% to 2,958 MW. The overall number of projects has increased and projects currently underway would expand installed capacity in the U.S. by a 100-130% in the years to come.

Compared to last year the industry is better positioned and availability of drilling rigs has improved. The joint efforts of the Bureau of Land Management (BLM) and the U.S. Forestry Service to speed up the process for leasing geothermal resources on lands they manage will also have a significant impact on the industry.

Recent lease auctions by the BLM have shown the increasing interest in geothermal development and in developers’ confidence in the sector. On August 5, 2008 the BLM auctioned 35 parcels over leases on 105,312 acres for a total sales price of USD 28 million which is up from last year’s record of USD 12 million for 122,850 acres. This should increase the geothermal project pipeline in the U.S. even further.

Increased renewable energy portfolio standards on state level play a positive role, as is the fact that both campaigns for the 2009 U.S. presidential elections are now including “geothermal energy” when discussing renewable energy and energy security.

The availability of financing will have an impact how quickly current projects will be developed. In the near-term financing cost are set to increase, impacting owners anticipated return. Overall, the outlook is positive and the geothermal energy industry should enjoy continuous growth in the years to come.

We are proud to be a member of this exciting industry and take part in the development in the United States. More information on our activities in the sector and our Global Geothermal Energy Team can be found on our website at www.glitnirusa.com/energy.

The overall outlook for geothermal energy development in the United States has improved greatly with now more projects under way than ever. In short these are the key developments in the U.S.:

• Overall installed capacity has grown from 2,851 MW to 2,958 MW, or about 4%.
• California represents 86% or 2,555 MW of overall installed geothermal power generation capacity in the U.S. followed by Nevada with 11% or 318 MW.
• There are now 7 states generating electricity with geothermal energy. Idaho and New Mexico have joined the pool of geothermal power generation states, with Oregon and Wyoming to follow shortly.
• The number of projects currently in development in the U.S. has increased by 40%, from 69 projects to 97 projects today, (103 with unconfirmed projects).
• Geothermal projects in development represent a maximum capacity of 3,950 MW or an increase of 54% to last year.
• The State with the most number of projects remains Nevada with now 42 projects, followed by California with 20 and Oregon with 11 projects.
• The state with most of the geothermal power generation capacity in development is Nevada with 1,100-1,900 MW, followed by California with 900-1,020 MW.
• Current projects under way require investments of 14-16 billion USD, with more than half of that amount needed in 2011 and 2012.

Meet us in Reno

The Glitnir Geothermal Energy Team is currently in Reno and is presented with a booth centrally located in the Expo Hall. We will also be represented as part of the conference.

To meet us pop by our booth or schedule a meeting with our team members on site.