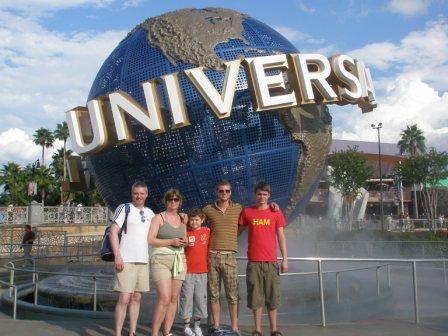 Icelandair’s Special Children Travel Fund supports children with long-term illnesses and children who live in other difficult circumstances. The goal of the fund is to give children in Iceland and nearby countries an opportunity to travel with their families.

A 13-year-old Icelandic boy, Benedikt Vagn, was recently awarded an Icelandair Special Children Travel Fund grant for himself and four family members to go on a fully-inclusive 10-day package to Orlando in Florida.

“It all started when Benedikt Vagn received a grant from the Special Children Fund on the first day of summer,” said his mother, Gunnhildur Hreinsdottir. “For 13 years, our son has wrestled with an illness and the effects and treatments have often been difficult for him. Therefore a grant such as this was greatly appreciated and a necessary refreshment for Benedikt’s body and soul”.

“We went to SeaWorld, Universal Studios, Islands of Adventure and the Kennedy Space Center. We also went to see Cirque Du Soleil, which was a fantastic show we can strongly recommend for all ages”.

“All the amusement parks were great; although Universal Studios and Island of Adventure were the highlights. They were buzzing, and the technology was amazing – all the latest in virtual reality and the experience can hardly be described in words”.

“It’s no exaggeration to say that all the family members became children again and laughed and smiled all day long! What a trip like this leaves behind is that the whole family enjoyed an amazing and unforgettable time together in different surroundings than everyday life.”

“Benedikt Vagn is over the moon and we are very thankful to the Special Children Fund for making it possible for us to give him something special and unforgettable. It was very much appreciated.”

The fund was established by Icelandair on the first day of summer 2003 – a public holiday celebrated at the end of every April in Iceland. Since then, the fund has provided funding to more than two hundred children.

Icelandair frequent flyer members can regularly donate points to the Special Children Fund. The airline also offers passengers the chance to donate money to the fund onboard any of its flights connecting Iceland with 24 European and North American destinations.

Visit the Icelandair website for more information on the Special Children Travel Fund.