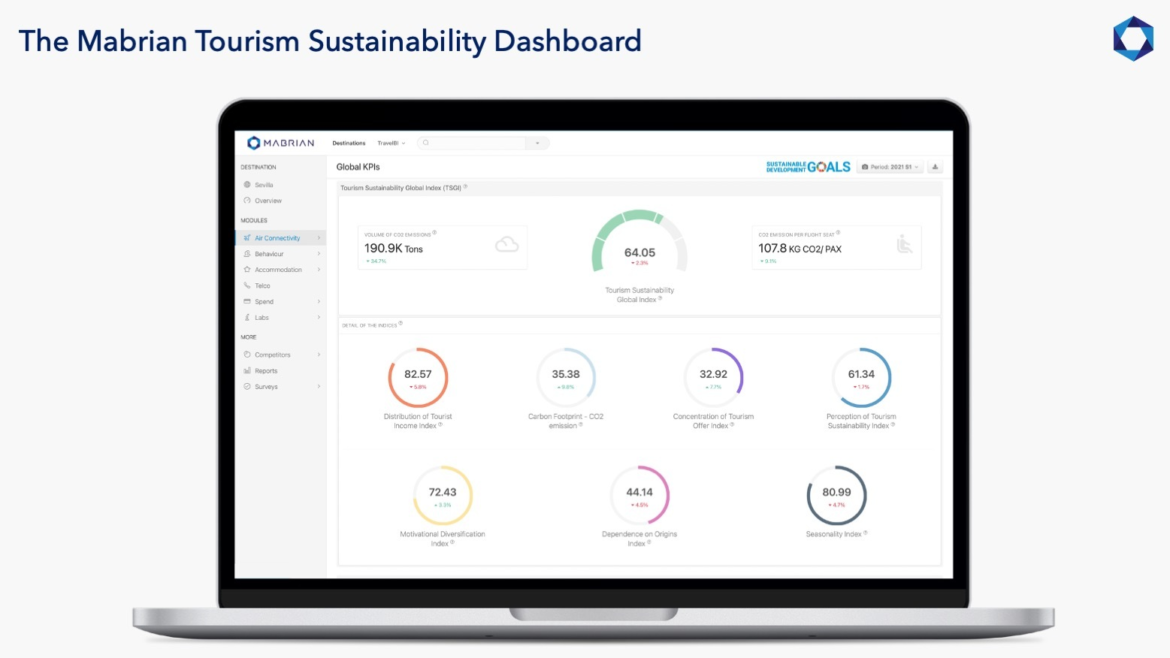 Palma, April 7, 2022. Mabrian Technologies, a leading tourism data and intelligence company, has calculated, compared and analyzed the carbon footprint of visitors arriving by air for the main Mediterranean destinations for the years of 2019 and 2022. To do this, the emissions of CO2 due to incoming air connectivity have been calculated in countries such as Portugal, Spain, France, Italy and Greece. The data for each country includes flights from any origin anywhere in the world to any airport within that country, and both the average carbon footprint per passenger as well as the total emissions emitted are calculated.

This study is published at the Sustainable Destinations Summit organized this week by the World Tourism Organization (UNWTO) in Mallorca, where Mabrian will participate as a speaker.  During the event Mabrian will launch this new indicator of tourist sustainability that will be used from now on to calculate the global tourism sustainability impact of destinations. This new indicator joins the other tourism sustainability indices that Mabrian has been calculating and analyzing for destinations since launching last year.

For this study published today, the new indicator has analyzed the carbon footprint that will be generated by the arrival of visitors by air to the five most important holiday tourist destinations in Europe (Portugal, Spain, France, Italy and Greece) between January and October 2022 – and is compared with the same period in 2019. For this calculation, the volume of scheduled incoming seats in this period for all destination airports in these countries is used as a criterion, calculating emissions with an estimate of occupied seats and the carbon footprint generated by the flights depending on the routes and the type of aircraft.

The conclusions reached after the analysis of these tourist data are:

By country, the results are as follows:

Carlos Cendra, Marketing & Sales Director at Mabrian Technologies, states that: “this indicator is a great tool to measure the environmental impact of the arrival of visitors to a destination by air and  it will allow destination managers to act in collaboration with the airlines. The dependence on remote markets, the occupation levels of flights and the type of aircraft offered by the companies are all relevant aspects to take into account in order to reduce the impact of the carbon footprint of a destination.”

“As we will propose at the Sustainable Destinations Summit organized by the UNWTO and the Consell Insular de Mallorca, destinations must take the initiative and lead the change in model, but for this they need measurement tools such as those that we can offer them through our tourist intelligence and big data analysis.”

To speak with Mabrian contact Roman Townsend on rtownsend@belverapartners.com