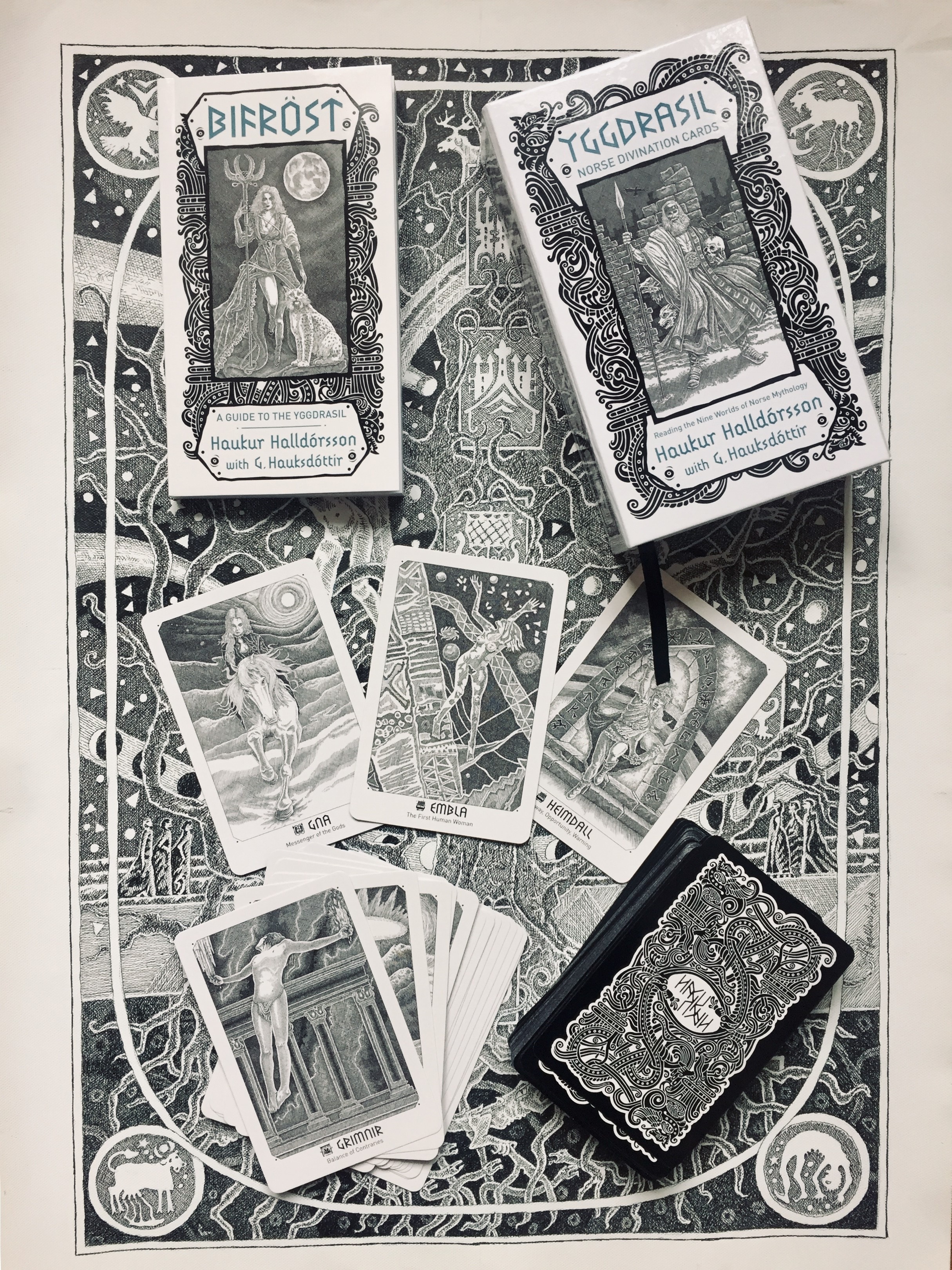 Both artists will be present for the opening.
Where: Café Ribo, Ackerstrasse 157, 10115 Berlin

Icelandic artist duo, Haukur Halldórsson, and Gunnhildur Hauksdóttir, have created a new deck of divination cards based on Norse mythology published this year by Llewellyn Worldwide. The deck is to be introduced and displayed at Café Ribo in Berlin on 6th December.

This is the first divination deck of its kind; with a method of divination stemming from the nine worlds of the mythical Yggdrasil tree. The Icelandic father and daughter team collaborated on this unique project – Haukur Halldórsson illustrated the deck and Gunnhildur Hauksdóttir wrote the accompanying guide.

Café Ribo in Berlin-Mitte will host the German launch on December 6, 2019 at 6pm. The original canvas drawings from the Yggdrasil deck will be on display and the set – as well as the drawings – will be available for purchase. Both artists will be present to give an introduction.  The event will be held in English.

There are 81 cards in the deck plus a comprehensive guide that explains how to use the cards and includes an in-depth introduction to Norse mythology. “The stories about the Norse gods are ancient. They contain the wisdom and the code of the Nordic pagan people and the philosophy of their way of living,” says Hauksdóttir. “They still have the power to enrich our lives today.”

Halldórsson and Hauksdóttir’s deck has based its method of divination in the Yggdrasil tree.

“The grand spread for the cards follows the placement of the nine worlds in Yddgrasil, based on the Poetic Edda, allowing the worlds to give meaning to each placement, ”

says Hauksdóttir. The cards present Halldórsson’s intricate ink drawings representing nine deities for each of the nine mythological worlds of Gods, giants, light and dark elves, humans, dwarfs, of fire and of the dead. “But the cards can also be used intuitively by anyone according to the user’s own divination.”

“For the Yggdrasil deck, we came together with illustrations and their readings to enable the deciphering of past mythology and folklore. “This has been an interesting project; two very different artists of pagan belief – working on a project like this, brings different creative twists to the story and we can be proud of the outcome,” says Halldórsson.

Haukur Halldórsson and his daughter Gunnhildur Hauksdóttir are Icelandic artists living and working between Iceland, Denmark, and Germany. Both adhere to heathenry, or Asatru, as viewed by the Icelandic Asatru community. Halldórsson is one of the original members active in reviving the traditional Nordic mythology of Iceland in the seventies and has devoted his art to Nordic and Northern European mythologies and folklore. Hauksdóttir grew up in heathendom, surrounded by folkloric illustrations, stories, poems, and nature.

Haukur Halldórsson is an artist and illustrator born in Reykjavík 1937. He studied art and design in Iceland and Denmark and started his carrier as a graphic designer gradually moving towards arts with his illustration of folklore. His current practice revolves exclusively around Nordic mythologies and northern European folklore. He works with drawings and objects in a variety of mediums. He is the designer of the “Arctic Henge” in Raufarhaufn, in the North-East of Iceland and the grand statue of the thunder god Thor erected in the town of Vík in South Iceland.

Gunnhildur Hauksdóttir, a visual artist working in performance and mixed media, was born in Reykjavik in 1972, she graduated with a BFA from the Iceland University of the Arts in 2001 and with an MFA from The Sandberg Institute in 2005. Hauksdóttir lives and works between Iceland and Germany and her works have been internationally displayed including recent exhibitions in the Uppsala Konstmuseum in Sweden and the Hess Gallery in Canada. Gunnhildur participated in the 2015 Venice Biennale for the Swiss Pavilion with her performance Erklärung.