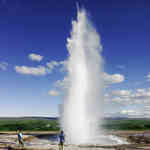 Iceland’s leading airline Icelandair has teamed up with specialist travel provider Discover the World and UK travel magazine National Geographic Traveller for a special competition, in which two lucky winners have the chance to win an exciting holiday in Iceland.

As part of the prize, a winner and a guest will receive return flights with Icelandair from Heathrow, Manchester or Glasgow; airport transfers; nine nights accommodation; and car hire on an unlimited mileage basis.

For those who lucky enough to win this prize, a holiday in Iceland is an incredible experience. Iceland’s breathtaking landscapes offer travellers endless possibilities for exploration. For example, travellers can explore the popular Golden Circle tourist route; home to the magnificent waterfall of Gullfoss; the geothermal area of Geysir; and Kerid a water filled volcano crater.

In addition, guests can drive further out to various parts of the island, for example, the Jokulsarlon glacial lagoon in the east of Iceland, which is filled with icebergs and various forms of wildlife, such as skuas and seals.

For more information on how to enter in the competition, click here.

The prize is valid for travel between April and September, and entries must be submitted before 16th March 2012.