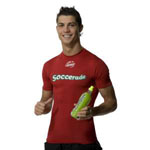 Cristiano Ronaldo, the world’s most expensive footballer, has launched a brand new iPhone app – where he stars as himself.

‘Ronaldo Soccerade Freestyle 2010’ charts the Real Madrid superstar’s rise from the beaches of Madeira to playing in Europe’s top leagues. The game play features motion capture graphics which perfectly recreate the moves which Ronaldo has become famous for. Players move through the levels trying to match their skills with Ronaldo.

The app, which marks the football superstar’s iPhone debut, is available to buy from the iTunes App store for £1.19/$1.99, and will soon be released on the Android & Symbian marketplaces.

This official Ronaldo app has been sponsored by Soccerade, the official energy drink for Cristiano Ronaldo, and produced by TalentNation.com, the online sporting social network in which the £80m star plays a prominent role. The app is designed by x11 apps, a London-based mobile technology studio with a focus on game and business applications development.

App players can also access the latest status updates and videos of Ronaldo, uploaded to his official TalentNation/Soccerade locker, without ever leaving the app.

The OpenFeint software also means gamers can compete against players from around the world on the global leaderboard and post their high scores to their social networking website.

TalentNation CEO Steve Sampson said:”Ronaldo’s footballing genius is perfectly captured in this great new game. Our players can also access Cristiano’s locker which is a unique feature, keeping bang up to date with his latest news and videos.”