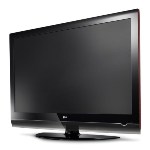 The first product designed by Seymourpowell for South Korean electronics giant LG Electronics to be released commercially comes out this month: the high-end LCD television, the LG70. The TV, which launches this month in stores worldwide and is one of LG’s flagship products for 2008, has a super-thin ‘teardrop’ structure, finishing at a point at the base of the television, where it blends from opaque to translucent, seemingly disappearing into nothing, so that it has a floating appearance when poised on a stand.

The backlit LCD television, aimed predominantly at the European market, was based on the idea of ‘invisible sound’, with no speakers to be seen. The product, which responded to a brief to create a truly ‘eye-catching’ product, celebrates instead the screen itself and uses a form of cutting-edge, flat-speaker technology to distribute sound evenly.

Seymourpowell was awarded the product contract in early 2007 and the final result was the work of a six-strong team, led by design director David Fisher. ‘We had worked with LG on concept development work from 2006 onwards for a number of mobile phones not yet on the market’, commented David Fisher. ‘Our relationship with LG is becoming ever-stronger and increasingly strategic, so we were delighted to be also considered for a different type of consumer product’.

For further information on other designs by Seymourpowell visit www.seymourpowell.com