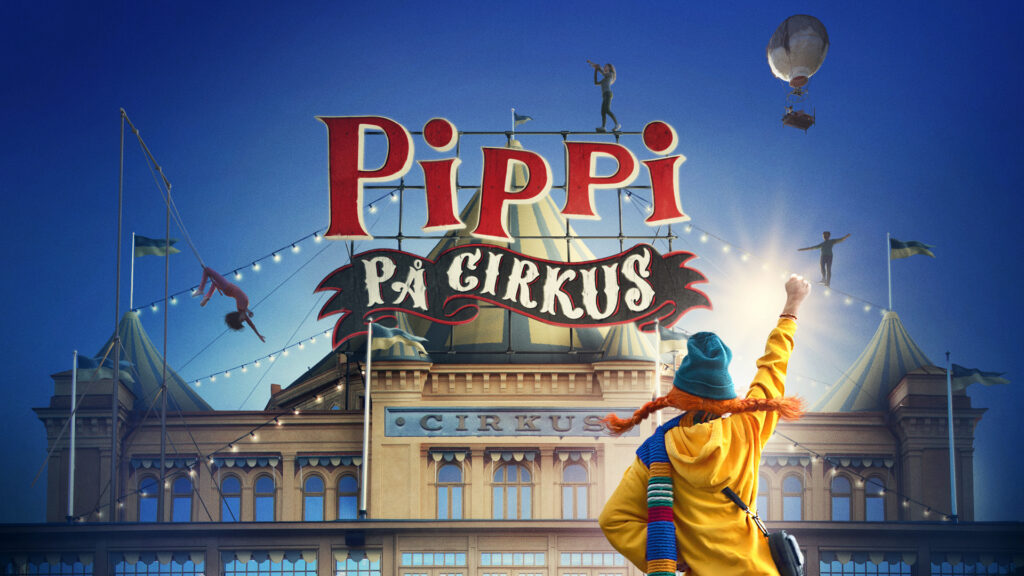 Björn Ulvaeus is the executive producer and is responsible for the show’s lyrics, with music by Benny Andersson, Vladimir Shainsky, Ángel G. Villoldo and others. The music is performed live by a flying Cirkus orchestra.

Cirkus Cirkör’s founder, the producer and artistic director Tilde Björfors, is responsible for the circus stage direction. She is assisted by Maria Löfgren, director and script editor, who is responsible for directing the show. Together with Björn Ulvaeus, Maria Blom and Tilde Björfors have written the show’s script, which is based on Astrid Lindgren’s story about when Pippi, Tommy and Annika go to the Circus and meet Circus princess Miss Carmencita, the line dancer Elvira and the world’s strongest man Starke Adolf. Magdalena Åberg is responsible for the show’s scenography and costume design.

“To a great extent creation involves playing. You imagine, invent, pretend and play roles. And it goes almost without saying that playing is even more important than usual if you are creating a circus musical featuring Pippi Longstocking. That really is play at the highest possible level. But respect for Astrid Lindgren’s legacy is shown at all times. As the work with writing ”Pippi at the Circus” progressed, I tried to integrate Astrid’s language into the lyrics as much as possible. Malin Billing, Astrid’s granddaughter, who has Pippi’s DNA coursing through her veins, definitely lets me know if I write words that don’t sound like something Pippi would say. Some years ago, I also tackled another national treasure, Vilhelm Moberg, when Benny Andersson, Lars Rudolfsson and I wrote ”Kristina from Duvemåla”. I approach Astrid and her Pippi with the same deep respect, and that respect is felt by all of us who have been involved in creating ”Pippi at the Circus”. But it is nonetheless playful and we really enjoy ourselves all the time,” says Björn Ulvaeus, executive producer.

“This is one of the most enjoyable theatrical projects I have worked on. There are so many amazingly talented people involved, not least Björn Ulvaeus, as well as everyone working with everything from the script and direction to the music, acting, choreography and circus artistry. And everything else of course, it is impossible to list everyone. But the great enthusiasm and professionalism of everyone involved, and the way this completely new concept of a circus musical has developed makes me very happy and has convinced me that we will see and hear something very special at Cirkus this summer,” says Malin Billing, responsible for theatre rights at Astrid Lindgren Company and granddaughter of Astrid Lindgren.

“We have really been longing for this! The rehearsal process has a fantastic creative flow at the moment – we explore, co-create and invent new things every day. When the circus artists meet music, lyrics, dance, Pippi’s infectious playfulness and imagination, a magic arises that is difficult to explain, it quite simply has to be experienced! Pippi is a fantastic inspiration in terms of making the impossible possible, and is almost more of a circus than the circus itself. It is as if she evokes a desire in all of us in the production team and the ensemble to dare to aim higher, to be more curious about each other’s differences and to dive deeper into the interaction between the art forms. We learn from her courage to constantly question the ordinary ways of doing things, to turn perspectives upside down and, last but not least, her best tool in all situations – to be kind. I am so incredibly happy about the interaction between all the various creators and that we can now finally give the audience a performing arts experience that goes beyond the ordinary. A show that captures the breathtaking and life-affirming energy of Pippi, who is an expert at play and imagination,” says Tilde Björfors, producer and artistic director at Cirkus Cirkör.

“Creating this show is like having access to a massive bag of sweets, with all the fun that involves! And a huge chest of drawers that is full of surprises: There is Cirkus and a co-producer who is a Cirkus director. Björn, who is still a child at heart and is full of humour, writes wonderful music. Magdalena’s fantastic scenography. Ellen’s lighting and Ambra’s choreography. And absolutely fantastic world artists and musicians. To create a family show for the big stage. It can’t get any better than that for me as a director,” says Maria Löfgren, director.

Pophouse Entertainment was founded in 2014 by Björn Ulvaeus and Conni Jonsson to strengthen and further develop brands and concepts in the entertainment industry. Examples of these include the upcoming ABBA Voyage in London, as well as the recently opened Avicii Experience and the digital cultural center Space in Stockholm. Pophouse also owns and operates the Nordic region’s leading podcast producer Perfect Day Media, as well as Cirkus and ABBA The Museum.
Visit: www.pophouse­.se

The Astrid Lindgren Company is owned by Astrid Lindgren’s children and grandchildren. The company manages all the rights to Astrid Lindgren’s work, and aims to disseminate and protect Astrid Lindgren’s authorship around the world. At present, 17 people are employed by the company, most of them specializing in different types of intellectual property rights areas. The business is based on a love for Astrid Lindgren and her work. The company strives to keep Astrid’s values alive in its daily work, with the children at the forefront, with the highest quality, honesty and respect for the outside world, curiosity and openness to people and ideas, reliability, business acumen and a dose of Småland-style common sense.
Visit: www.astridlindgren­.com/en

Cirkus Cirkör is a politically independent non-profit association founded in 1995 with the goal to establish new contemporary circus in Sweden, artistically and educationally, and to put Sweden on the contemporary circus world map. Cirkus Cirkör’s activities include performances on tour in Sweden and around the world, courses and educational programmes for the young, adults and the elderly  with or without disabilities, upper secondary school programmes in contemporary circus and events for companies and organisations.
Cirkus Cirkör also runs Cirkör LAB – a creative development environment for artists and creators from all around the world. The name Cirkör is based on the French words Cirque and Coeur, circus and heart. In 2018, Tilde Björfors and Cirkus Cirkör received Premio Europe per il Teatro’s prize XV Europe Prize Theatrical Realities – the award ceremony that is often called the Oscars of European theatre art.
Visit: www.cirkor­.se