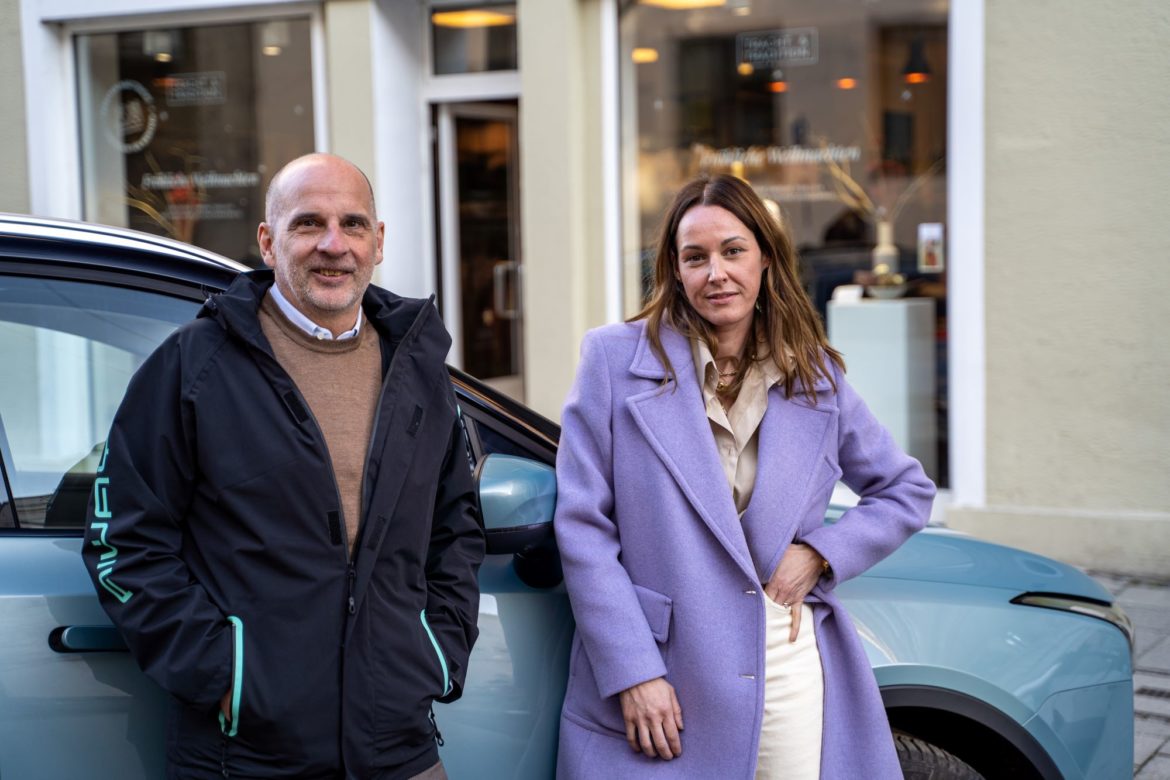 Shanghai/Munich, March 9, 2022 – Under the title “What’s next?”, Aiways is launching a series of interviews with discussion partners from industry, business, and politics. The sixth interviewee is Alexandra von Frankenberg, founder of the legendary traditional costume label Amsel and a successful interior designer. She talked with Aiways Managing Director Dr. Alexander Klose primarily about design and why form does not always have to follow function. Alexandra von Frankenberg likes to quote Carlos Obers: “Design is art that makes itself useful. Because there is a small but subtle difference between useful and practical.”

What is design anyway?

Alexandra von Frankenberg: “I think it’s difficult to answer that in principle, but I always refer to Carlos Obers, the legendary copywriter. In the eighties, he coined the phrase: “Design is art that makes itself useful” and I think that sums it up perfectly, because good design is art, definitely.”

Dr. Alexander Klose: “While we’re on the subject of sayings when it comes to cars, it’s usually clear that the motto is “form follows function”, because a car has to fulfill a purpose and you have to design it accordingly. Aesthetics have to be there, of course, but one doesn’t work without the other. It’s an amalgamation that needs both. Function is never beautiful, and neither is form alone. In addition, there is another factor with cars, because you can’t implement everything. Design always has to go hand in hand with engineering, and at the same time you always have to keep an eye on things so that they don’t take on a life of their own. During the development process, you always have to ask yourself: “Is this function really needed? Does it really benefit the customer?” Because you’ve only created good design if it does something if the customer benefits from it.”

Alexandra von Frankenberg: “You wouldn’t design a bike that is square. Of course, it’s an art to design a beautiful bike, but it has to be round. Useful does not always equal practical, because good design, (i.e. something beautiful), doesn’t necessarily have to be practical. I like to take the armchair I have in my living room as an example. It’s a designer piece and beautiful, but it’s not necessarily practical. Sure, you can sit on it, but it’s not super comfortable and it’s huge. So, it’s useful, but not practical and that’s why it’s clear to me that a good design doesn’t have to be practical.

Can a good designer design everything?

Alexandra von Frankenberg: “A designer must always be able to put themselves in the shoes of a product. They must know what makes up the materials and the technique. In tailoring, for example, you must know exactly what a garment is used for, you can’t just tailor anything. In principle, however, I would say that a good designer can work in all industries if they understand the product.”

Dr Alexander Klose: “Understanding the function is essential for designing a car because it then quickly becomes a matter of topics such as aerodynamics and efficiency, which of course immediately have an effect on consumption and costs. The design makes a huge difference in these areas. Function, therefore, has a very high priority and the line our designers have to walk is extremely narrow, because of course, the decision to buy a car is always an emotional one and you don’t win hearts with an unaesthetic vehicle. So, for us, you can’t have one without the other, form and function have to be kept in perfect balance.”

Alexandra von Frankenberg: “I’m undecided about that. If you become known as a designer, whether in fashion or interior design, then of course you have your own language and thus a recognition value, but does good design necessarily need recognition? I don’t think so. A good designer can do anything, even new things, if they have a good feeling for aesthetics. Above all, a design is only good and pure when there is little egotism involved. The product, or the furnishings, must meet their requirements and not necessarily what characterizes my style.”

Dr. Alexander Klose: “I find that very interesting, because I have had a case of egotism before. We worked with a designer, someone with the best reputation and excellent references, who developed his own egotism and designed a car that only met his expectations, but which went in completely the wrong direction. That showed me that someone with a lot of fame and an impressive portfolio doesn’t necessarily have to be a good designer.”

Alexandra von Frankenberg: “I think that being a good designer actually means not taking yourself so seriously and not putting yourself in the foreground. Of course, that is a contradiction in terms, because you want to be recognized as a designer, but you have to be able to read between the lines and clearly communicate between the client’s wishes and your own ideas. I usually do it in such a way that I introduce my ideas and put them up for discussion so in the end the client thinks it was his idea. Then both sides are happy.”

Do you notice bad design immediately?

Alexandra von Frankenberg: “Definitely. You can not only recognize bad design, but also bad quality, but of course it is also a very subjective topic. For one person it’s “mega”, for another “Oh God”. Things like quality and function can be evaluated much better and assessed objectively because they are measurable factors, but even things that are no longer trendy don’t necessarily have to be bad. If you rethink them, make them new and simply charge them with new emotions, then you can suddenly unleash a whole new wave again.”

Dr Alexander Klose: “But I do think that good design is often practical. If it is impractical, then in my eyes it is no longer good design. Unless you don’t really want the function. Like an armchair that looks good but isn’t comfortable. It’s great as a visual object, but if you had to sit in it every day, you wouldn’t buy it.”

How do you hold your own in a very traditional and conservative market environment like traditional costume fashion?

Alexandra von Frankenberg: “Good question. We didn’t start out with the aim of turning the industry on its head. We started with what we enjoy, with something new in a traditional industry. Traditional costume is something that has existed for centuries, it is an industry that will never die out because it belongs to the country and the people. We are now simply mixing this tradition with modernity and even though it may sound hackneyed, it works, and it works very well. Especially among the younger generations, traditional costume has been experiencing a real boom for some time. The modern customer is also more demanding; they demand new looks, new trends, and all that within the very narrow framework of traditional costume. The challenge, therefore, is to constantly reinvent and innovate the familiar.”

Is te key to success in such fiercely competitive and well-staffed industries to overtake the big corporations with a small team?

Alexandra von Frankenberg: “I don’t want to talk about overtaking. Because we have our focus on other things than just quantity, but diligence is a huge issue in this context. Especially at the beginning of Amsel, we worked in an incredibly disciplined and concentrated way, put every euro we earned straight back into the company and invested all our free time. We made a lot of sacrifices, privately and financially, but we did it with passion and passion is the key to success. If you are passionate about what you do, if you like to go to the office or the studio every day, then many things will happen on their own. The second essential factor is quality, because in the end it’s always quality that decides. We had really big problems in the beginning: production facilities that didn’t deliver at all, or those that simply delivered poor quality. Then you have to communicate that transparently and see how you can get the problem solved.”

Dr Alexander Klose: “Quality is also the key for us. When you come to Europe as a Chinese start-up, you are naturally followed extremely critically in the industry. Every weakness is immediately exploited, but that was exactly what drove us. Not just to build an affordable car, but a very solid one at exactly the right time. The egotism that you mentioned earlier is certainly still present in one or two traditional manufacturers and that’s where you can overtake. We all start with a blank sheet of paper when it comes to electromobility. We all have the same problems, and the advantages of a long history can no longer be used in the same way as they were with conventional cars. Add to that the ever-shorter development times demanded by the market, and here too we are much more flexible with a young and lean company.”

Alexandra von Frankenberg: “Fortunately, that’s not the case with us. With folk festivals, you always have the same cycles when demand is highest. Although we also see more and more requests for traditional costumes for weddings and other celebrations, the most important date for our collections is still the Oktoberfest. That’s why we’re very happy to be actively shaping the look of the Wiesn again this year.”

Founded in 2017, Aiways is a Shanghai-based personal mobility provider with its European HQ in Munich, Germany. It was the first Chinese start-up to introduce an electric vehicle to the European market with the launch of the U5 in 2020 – a battery-electric SUV with impressive range, style, and quality. Aiways is rapidly continuing its expansion in Europe and beyond: order books are open in Germany, Netherlands, Belgium, Denmark, France, Israel, Switzerland, Spain, Portugal, Italy, and Sweden – with more markets to follow. The U5 SUV is produced at Aiways smart production facility in Shangrao – one of the most modern car production facilities in China. The IT- controlled processes with challenging quality gates follow the standards of Industry 4.0. With an initial production capacity of 150,000 units per annum, Aiways can increase this number to 300,000 units when global EV demand rises. Aiways’ next model for Europe will be the battery-electric U6 SUV-Coupé. With a focus on sophisticated aerodynamics, highly connected driving, safety technology, and a sporty design, the U6 SUV-Coupé is just the next chapter of Aiways’ promising future.​

You can find all Aiways press releases and press kits, as well as a wide selection of high resolution, downloadable photographs, and video footage on the media website: http://media.ai-ways.eu/.