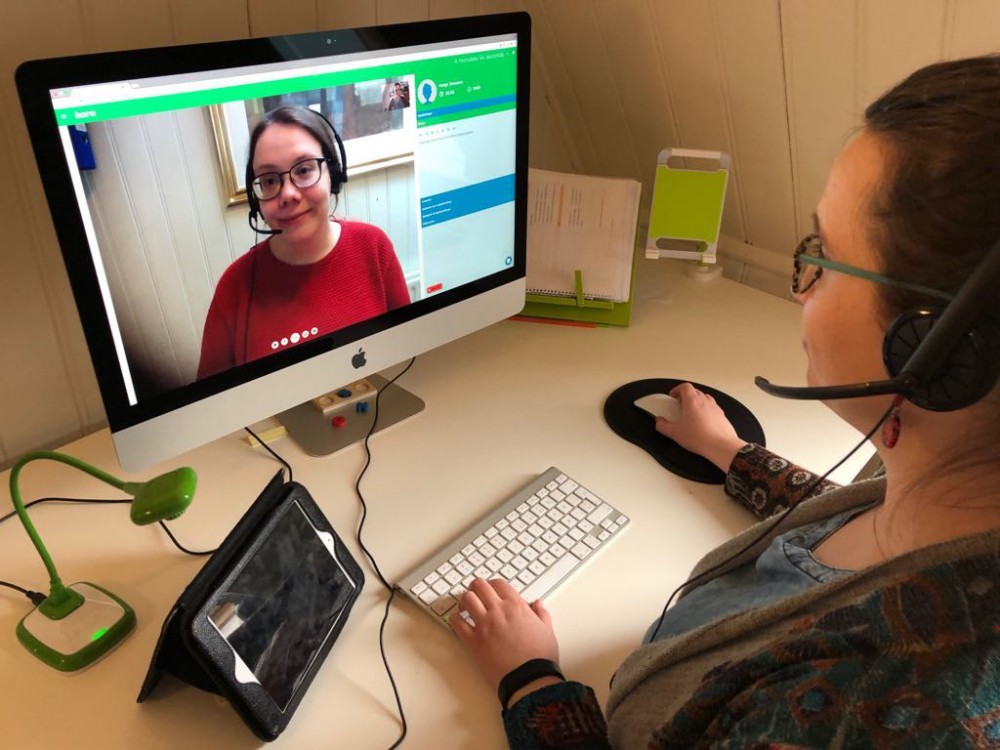 The Icelandic company Kara Connect, which is behind the platform providing treatment via video, opened an office in Odense last year, and is now in a testing phase with Odense Municipality.

Photo: Kara Connect in use (WHINN)

Telecare. Odense Municipality’s Children’s and Youth Management (Børn- og Ungeforvaltning) has started testing a new video-driven treatment platform. The Management started trials with Kara Connect in June with four therapists, with an expectation that each caretaker would implement it with two users.

“One of my clients with anxiety has difficulty making it to the clinic on account of work and young children. Because of this, it makes sense that we ‘meet’ in her own home. Another client was travelling internationally for a period and used the video meetings to continue her support”, says Lene Hougaard Jensen, a psychologist at Odense Municipality.

She has used telemedicine earlier, and therefore has quickly gotten used to its form and technique.

For other therapists, it is a significant change to use telemedicine. Both on account of the technique and because some users are skeptical of the screen.

Kim Juul Larsen is a psychologist and the team leader of Health & Prevention North (Sundhed & Forebyggelse Nord) at Odense Municipality.

He sees telepsychology – providing therapy via video – as a possible piece of the Municipality’s offer:

“Video solutions can save transportation time for the citizen. It is also our experience that this video solution minimises cancellations. There is also a presumption that video consultations will minimise stigmatising some types of people, for example, those with anxiety who cannot leave the home. Via telepsychological conversations, they can get help anyway.”

According to Kim Juul Larsen, video systems furthermore are the answer to citizens’ expectations about using technology when in dialogue with the public authorities.

“So there are many arguments to test these video solutions and introduce them where they make sense”, he explains.

Beyond the good stories, there is also bristling and scepticism. Partly due to technical challenges for those who are not so used to using a screen, and partly because it demands a conversation with both the citizen and the public authority:

“Yes, it is possible to have a good conversation via a screen. And as a professional, one can also decode the non-verbal signals visible in a video meeting”.

This has been the evaluation of most of the therapists who have participated in the trial.

“Therefore it takes time to figure out how telemedicine is a gain, and how it might not work”, says Kim Juul Larsen.

The trial extends until December, and the Children’s and Youth Management has already decided to involve more therapists until the end of the trial.

From Kara’s standpoint, their complete attention is focused on implementation, and recognising that successful implementation takes time. Their employees are offering workshops and 1-on-1 help as a large part of the trial in Odense.

Tele-treatment a Theme of This Year’s WHINN-Programme

There is widespread agreement that tele-treatment is the way forward, but not without some bristling and exceptions. At this year’s WHINN conference, the topics of digital health and tele-treatment will be up front and center. Odense University Hospital, together with IDA Healthcare Technology (IDA Sundhedsteknologi), Health Innovation of Southern Denmark (Syddansk Sundhedsinnovation), and Accenture, present the track “Digital Health: Is Digital Health the Future for Health Care?” The purpose is to research how digital transformation will come to influence treatment.

Mette Bossen Linnet, Chairperson for the Region of Southern Denmark’s Digitalisation Committee and member of the Social- and Psychiatric Committee, will present the visions of digital health together with AI-manager and data expert at Accenture, Dr. Sean McClure at “What Are the Visions for Digital Health Care?”

Kara Connect’s Director, Thorbjörg Helga Vigfusdottir, developed the concept while she served as a city council member in Reykjavik. She says:

“I saw how difficult it was for patients – especially children and the youth – to get access to therapists. Reykjavik had large expenses for therapy, but with very little effect. On the other side were the therapists, who spent an enormous amount of time on transportation and on writing analysis and bring other parts of the associated staff up-to-speed.”

Thorbjörg pointed out positive effect that the citizens get more equal access to treatment with telemedicine solutions.