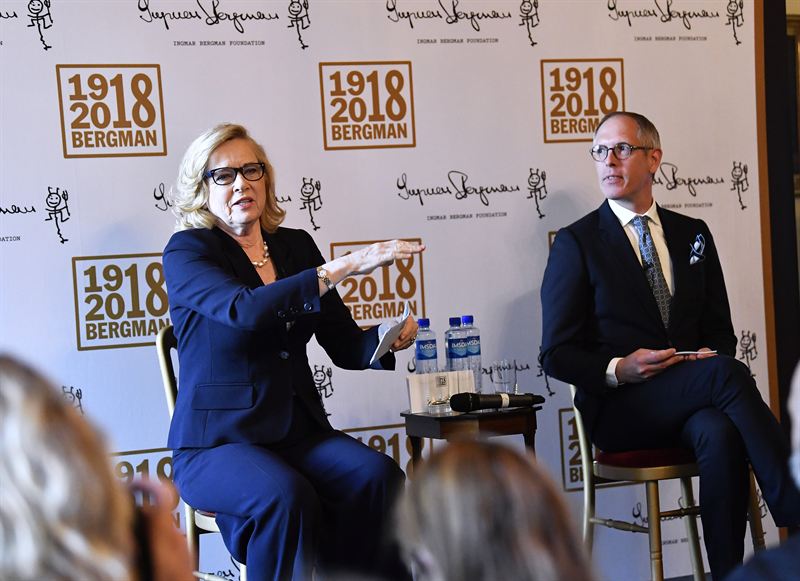 2018 is set to be a fantastic cultural year in memory of Ingmar Bergman. The world-renowned Swedish director and writer was born in Uppsala, Sweden, on 14 July 1918, and the 100-Year Jubilee, which begins this autumn and continues throughout 2018, will be celebrated across the globe.

The Ingmar Bergman Foundation was assigned by the Swedish government to co-ordinate and communicate the events taking place during the 100-Year Jubilee. The Foundation has put together a presentation of the global events planned thus far; including theatre performances, new films on Bergman, retrospectives of his own films, exhibitions, conferences, and much more.

On Monday 18 September, the Bergman 100-Year Jubilee will be launched in London by the Ingmar Bergman Foundation along with the Swedish Embassy. We are delighted to present Liv Ullmann as the guest of honour throughout the day’s events, as she shares memories and tales of her time with Ingmar Bergman.

– We are very pleased to present an overview of the various activities planned to celebrate the Ingmar Bergman 100-Year Jubilee. There is a great interest in Bergman, due in large part to the successful theatrical stagings based on his works. Nevertheless, we are surprised by just how much is already planned for the 100-Year Jubilee, states Jan Holmberg, CEO of the Ingmar Bergman Foundation.

– Ingmar Bergman has enriched, not only my life, but an entire world through his masterpieces in film, literature and theatre. The celebration of the Ingmar Bergman centenary throughout 2018 will truly acknowledge him as one of the most influential and creative icons in cinematic history. I am convinced that his vast legacy will continue to rightfully honour his brilliant artistry, says Liv Ullmann.

World’s largest jubilee of a single filmmaker, a true international event, co-ordinated though not instigated by the Ingmar Bergman Foundation.

Centenary will take in all of Bergman’s artistry: as a filmmaker, man of the theatre, writer.

Dozens (and counting) of large-scale Ingmar Bergman retrospectives at cinematheques and film festivals around the world.

At least five film or television documentaries on Bergman (one Swedish, two German, one French, one Finnish).

First-ever Bergman remake, Scenes From a Marriage, to be produced and broadcast internationally within the year, showrunner Hagai Levi (In Treatment, The Affair).

Several travelling and fixed exhibitions, including at The Museum of Performing Arts in Stockholm, Sweden.

Fifty-odd new Bergman stagings, including (but certainly not limited to) the following:

A complete and updated timeline is available at www.ingmarbergman.se, which also features a calendar of the entire Bergman 100-Year Jubilee, with detailed information on the various events.

Press materials, including Bergman portraits, film stills and logos for free use, are available at: http://www.ingmarbergman.se/en/press

About #Bergman100
The year 2018 marks 100 years since the birth of Ingmar Bergman: world-famous filmmaker, legendary theatre director and exceptional writer. After his passing in 2007, Bergman has furthermore become one of Scandinavia’s most-performed playwrights. Ingmar Bergman was born in Uppsala on 14 July 1918, and the Jubilee, beginning during autumn 2017 and continuing throughout 2018, will take place over the entire world, with theatrical performances, exhibitions, documentaries, film retrospectives, book releases and festivals.