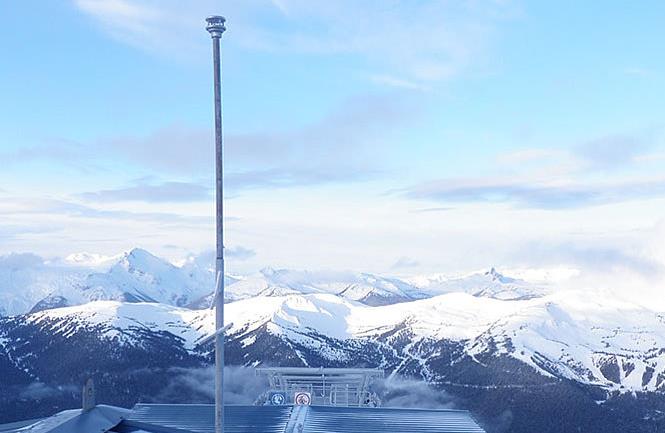 Fellbach, Baden-Wurttemberg (enewswire ) August 31, 2017 – Summer is drawing to an end and the cold season is approaching. Reason enough for the Lufft sensor company to introduce an upgraded version of the VENTUS ultrasonic wind sensor – the VENTUS-X. The revised sensor is equipped with an enhanced 240-watt heater and is available from now on.

To get it ready for the market, Avinor, the Norwegian airport integrator, put the VENTUS-X to the test last winter. For the project, they installed two units at two different extreme locations in Norway. A sensor was mounted on Kjølen Mountain, near Tromsø airport, at an altitude of around 2600 feet. Here, the average temperature in winter is minus 23 degrees Fahrenheit. The second was placed on an 1100 feet high summit of Rustadfjell Mountain, near Bardufoss airport, with an average temperature of minus 14 degrees Fahrenheit in January.

Both locations are always very windy and are also exposed to frequent snow showers in the winter. In spite of the adverse conditions, the two VENTUS-X models have delivered reliable wind data since their installation in the autumn of 2016. Sander Bjørn Hansen, system manager at Avinor says: “The new sensors are much improved and [their] stability is now as good as our users could wish.”

The robust and maintenance-free wind sensor is particularly suitable for professional meteorological applications in all climate zones. In addition to applications at airports, it can be used particularly well by weather services, at ports, on ships, wind power plants, in traffic management systems, in avalanche and flood warning systems or as a component in other hydro-meteorological monitoring networks.

The robust aluminum housing of the sensor, which is also used for ship propellers, protects against wear and rust. Even salty and humid air, as it occurs in coastal regions, cannot harm the VENTUS-X. Its stability and maintenance-free operation is due not only to the enclosed housing, but also to its advanced measurement principle.

PARAMETERS AND PRINCIPLE OF THE VENTUS-X

The VENTUS-X measures air density, wind speed, wind direction, virtual temperature, as well as air pressure and delivers the data in real time. Wind measurement is based on ultrasonic technology. Using a time-difference method, it is able to determine wind speed and wind direction. It records minimum and maximum values and reports them both in scalar and vector form.

The data is issued via serial and analog interfaces to provide compatibility with as many standard data loggers and PLC (Programmable logic controller) Systems as possible. Available interfaces are SDI-12 and RS-485. The sensor provides the data via the UMB-binary, UMB-ASCII, NMEA, SDI-12, Modbus, and RTU protocols.

An integrated heater keeps the sensor head free of ice even in extreme cold conditions. Additionally, the ultrasonic probes are individually heated to best protect what is most important for the measurement.

MADE IN GERMANY: TESTED AND CERTIFIED

The ultrasonic wind sensors from Lufft have also been tested and certified by official institutions such as TÜV SÜD. They were exposed to extreme temperature, humidity, vibration, and wind. They also successfully tested the ultrasonic wind sensor for electromagnetic compatibility as well as for susceptibility to rust using salt air.