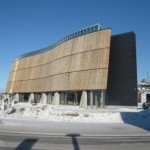 A trade fair currently taking place in Nuuk, Greenland, is helping to promote the trade relations between Greenland and Iceland. The aim of the fair is to increase the commercial ties between Iceland and Greenland, as well as provide opportunities to meet local businesses, establish business contacts, and highlight the public services within the two countries.

The three-day event, which began yesterday, is a collaboration between Promote Iceland, Greenland-Iceland trade council, and Air Iceland, and is currently taking place at the cultural centre Kulturhuset Katuaq until Saturday 26th October 2013.

Iceland‘s first Consul General in Nuuk, Pétur Ásgeirsson, will be in attendance during the fair.  The main role of the Consulate is to strengthen the business relations between Iceland and Greenland, and to increase cultural relations and tasks related to Artic cooperation.

Furthermore, Arctic Services, a joint initiative by companies and institutions in Iceland, will be showcasing its services.

Arctic Services was founded as a common platform for Icelandic industrial and technical service providers, research facilities, engineering companies, aviation services and public utilities.  Diverse commercial interests are all represented within Arctic Services, which is the common denominator of the companies involved and exclusively focused on promoting the high service level and infrastructure to those involved in arctic operations.

Submit Your Press Release at eNewsWire