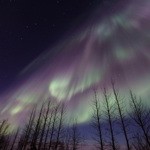 NASA scientists have stated that this winter will experience the peak of the Solar Maximum, meaning that the Northern Lights in Iceland will be at its most active since the past decade.

The Solar Maximum is the title given to the period of greatest solar activity in the 11-year solar cycle of the Sun. Scientists have revealed that growing levels of gas particles caused by a ‘solar tsunami’ from the sun have been mixing with the magnetic field surrounding the Earth.

The sun’s own magnetic fields have been dragging open and snapping back the Earth’s magnetic field, creating a continuous loop around the planet, which then produces electrical currents that react with the gases in our atmosphere, ultimately causing them to glow. These purple, blue, red and green colours are known as the Northern Lights, or the Aurora Borealis.

The natural light displays of the Aurora Borealis are without a doubt one of nature’s most spectacular visuals. These displays occur most frequently in the Arctic Circle, centred within a 2500 km radius of the geomagnetic pole.

Due to Iceland’s perfect location just outside the Arctic Circle, the Island in the North Atlantic proves to be the ideal viewing location for the Northern Lights.

Reykjavik Excursions, a leading tour provider in Iceland, is offering trips to view the Aurora Borealis as part of its Northern Lights tour.

During the aforementioned tour, guides take sky-gazers to locations with the best viewing possibilities, dependent on weather. Here, lucky viewers will get the chance to experience the dancing lights of the Aurora Borealis.