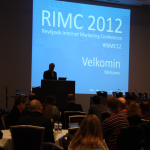 The final call for discount early bird tickets for the upcoming Reykjavik Internet Marketing Conference, RIMC 2013, has been announced by the event’s organisers.

Organisers have stated that the special discount tickets will be running until Wednesday 20th February. This special offer applies a 20 percent discount to the original ticket price of EUR 295.

Now in its 10th edition, the 2013 event will be held in Iceland’s capital, Reykjavík, taking place over 21st and 22nd March. The two-day event is set to feature sessions from over 30 international marketing leaders, including representatives from Dell, Spotify, Google, and Twitter.

The 2013-edition of the conference is a two-day boot camp featuring content from over 30 internationally renowned speakers, focusing on social media and Internet marketing.

For 2012, the festival saw just over 300 attendees in total, with more than 25 percent of guests from outside of Iceland, including the UK, Norway, Sweden, U.S., Germany, Russia, Iran, and more.

RIMC is an essential networking tool for marketing and advertising people, web editors, sales and marketing managers, as well as directors of small and large businesses. The conference is also ideal for anyone who is interested in business on the Internet.