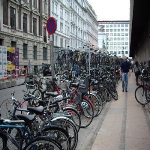 The Museum of Copenhagen is currently hosting an imaginative exhibition on the bicycle culture of Copenhagen. The exhibition follows the history of Copenhagen’s bicycle tradition from the Draisine to the modern bicycle. The exhibition explores the biking habits of Copenhageners throughout the ages and focuses on the representation of bicycles in art, literature and popular music. The exhibition will also contain a number of personal tales of cycling and the city from known and unknown contemporary Copenhageners. Prominent local inventions such as the Long John or Christiania bikes are also on show.

With thirty-six percent of Copenhageners travelling to work or school on a bicycle cycling is one Copenhagen’s most popular forms of transportation. The city has even made it possible for tourists and visitors to do the same via City Bikes. City Bikes is a free transport service available to all visitors and residents, and is made up of 2000 bikes in over 100 cycle ‘stations’ accross the city centre. To celebrate Copenhagen’s enthusiasm for cycling, an exhibition is being held at the Museum of Copenhagen.

The International Cycling Union (UCI) recognised Copenhagen’s enthusiasm for bicycles by awarding the city the title of Bike City, the first in the world. Bike City Copenhagen (BCC) began in 2008 and continues on into 2011 consisting of numerous races and cycling events with some allowing amateur participation. Here are some of the events already scheduled: Track World Cup in Ballerup Super Arena: 24 – 28 March 2010 and the Road Cycling World Championships (Rudersdal-Copenhagen) 21 – 25 September 2011.

Every cyclist however needs to rest their legs at some point, so Copenhagen hosts a wide range of luxurious hotels that are well-located and have great facilities. Many of the hotels are very accommodating with friendly staff from all over the world that are always happy to assist with any queries. Most of the rooms are equipped with air conditioning, a mini bar, and some hotels even offer a 24-hour convenience store for ease and availability. As well as all this, for all the cyclists the city provides 110 bike-racks, 1 bicycle repairshop for the city bikes, and 4 mobile city bike-repairshops – for reparations on the spot.

More information and details on hotels in Copenhagen can be found at www.hotelsincopenhagen.dk