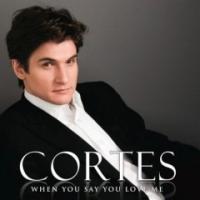 Icelandic singer Gardar Thor Cortes has this week released his latest album, ‘When You Say You Love Me’.

The Icelandic tenor has had a phenomenally successful year in the UK with a No 1 selling album, sell out tours and a Classical Brit Award nomination. Cortes is also scheduled to perform throughout the UK, USA and Asia this year.

Cortes’ No 1 selling self titled debut album was released last year and stayed at the top spot for 3 weeks. The album received widespread acclaim, including a nomination for the prestigious Album of the Year Award at the 2008 Classical BRIT Awards. Cortes’ stunning talent also secured invitations to perform and tour worldwide with some of the industry’s leading artists including Katherine Jenkins, Lesley Garrett, Natasha Marsh and Dame Kiri Te Kanawa.

The album features opera favourites such as ‘M’appari Tutt Amor’ from Martha, ‘Pourquoi Me Reveiller’ from Werther, ‘Com’e gentil’ from Don Pasquale, modern favourites ‘She’ from Notting Hill, ‘Lady’ – one of the most loved love songs of all time and a beautiful duet of ‘The Prayer’ with Natasha Marsh.

The album also includes a collection of stunning new material specially rearranged for Cortes including the touching ‘Mama’ and ‘Autumn Leaves’. Not forgetting his Icelandic roots, the album will include a classic Icelandic lullaby ‘Sofdu unga astin min’. The breathtaking leading track ‘When You Say You Love Me’ will be the first single to be released from the album.

When You Say You Love Me can be ordered online from Play.com and at Amazon.co.uk.

For more information on the new album and upcoming Cortes events visit: www.officialcortes.com